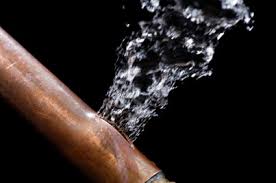 Many plumbing leaks, such as a leaky kitchen faucet, are pretty obvious from the start.  Others aren’t so clear.  It’s a good idea to check under sinks and at appliance hook-ups (such as your clothes washer and water heater) from time to time to avoid the gradual progression of water damage.

Major leaks occur less often, but they’re pretty dramatic.  If you see pooling water and/or hear the rush or hiss of a leak from behind a wall or elsewhere, it’s clearly time to shut off the water to your home or building and call an emergency plumber.

In other situations you may have a small leak under the floor or within a wall and not even realize it.  One homeowner’s older house was on a hill and the plumbing was distributed under the floor in a crawlspace.  One spring they noticed that their windows were fogging up, and saw a big jump in their gas and water bills.  But it took another month’s high utility bills before it occurred to them to check the plumbing.  It turns out there was a sizable, although not huge, leak in a fitting for one of the hot water pipes.

It’s important to keep an eye out for leaks, and not just to conserve water and save on utility bills.  If ignored sooner or later you’ll end up with water damage, which could range from superficial changes in appearance all the way up to major structural damage.

January’s early cold spell combined with warmer temperatures soon after contracted and expanded our water in San Diego and many home and businesses suffered damages due to small problems that quickly exacerbated.

Do I Have a Leak?

Symptoms usually aren’t as noticeable as in the above example.  There may be just a small increase in your water bill, and your only other clues may be slightly damp, warm, or cold spots on the floor or walls.  Or you might notice some mold.  Don’t forget leaks can also occur in your landscape irrigation system or radiant heating system.

If you even suspect a leak it’s a good idea to try a quick leak test yourself.  Turn off all water users, including automatic appliances like water softeners and refrigerator ice makers.  Make a note of your water meter’s readings;  taking a photo of the dials is a great way to do this.  Then wait several hours and check the meter again.  If there’s been any change at all it’s likely you have a leak somewhere.

A professional local plumber can perform a similar test, with the addition of a pressure meter.  This “pressure test” is more sensitive and accurate.  An experienced plumber can get a good idea of the size of the leak.

Even if symptoms give you a pretty good idea of where the problem is, it’s a good idea to call in a leak detection expert.  Otherwise there’s a risk you’ll end up with numerous holes in the wall from the process of tracking down the exact location.  Or worse still, several extensive penetrations through your concrete floor slab.

At ASAP Drain Guys & Plumbing,  our leak-detection specialists draw from a variety of gear, choosing the best ones for your situation.  Sensitive moisture and humidity meters can identify a general area, and we can then proceed to pin-point the location.  Our electro-magnetic instruments are especially helpful in tracking down underground leaks, such as from a watering system.

We also have the latest state-of-the-art thermal imaging equipment.  These digital cameras are extremely sensitive only to infrared light.  The hotter an object is, the more infrared light it emits.  That lets us “see” hot and cold spots, down to a small fraction of a degree in temperature, in order to go straight to the problem.

Some situations call for more involved “acoustic” testing.  Here the pipes are drained and then filled with a pressurized inert gas.  Special microphones, amplifiers, and headphones then lead us to the hissing sound of where gas is escaping.

Over the years we’ve tried many manufacturers and makes of test gear, and stick to the very best.  Combined with our plumbers training and experience we can find and repair virtually any leak with the absolute minimum of demolition and follow-up home repair.