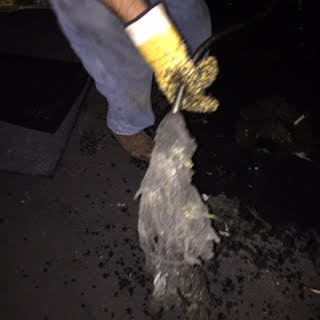 Flushing a wet wipe down the toilet seems like a natural thing to do, but that will cause problems.  Maybe not immediately, but eventually.  And maybe not at your home, but further down the line.  But either one means an emergency call to the plumber.

They’re responsible for backed up toilets and sewer back ups, often re-occurring just a few weeks after the last visit from a plumber.  That’s one of the reasons why it’s important to discover the cause of a clog rather than just clearing it. Flushing them down the toilet is also responsible for what’s been called a crisis in sewer lines and treatment plants in urban areas throughout the country.

Why?  Disposable wet wipes aren’t flushable because they’re more durable than toilet tissue.  That’s one reason why people like them and they’ve become so popular, but that means they don’t readily break apart.  Not only can they block the sewer line themselves, they also trap grease, grime, and other debris to form really tough clogs.

If you only drop in one every now and then you might get away with it, but any problem in the sewer line — such as grease build up, fine tree roots, or even a sharp turn in the pipe — means that they can accumulate and cause big problems.

Headlines around the U.S. have been reporting problems for consumers, as well as major problems for sewage treatment plants.  The Orange County Sanitation District has experienced numerous problems, including backed up sewer lines, caused by flushing these sorts of products.  But the the record goes to London for a 15 ton clog in the sewer system composed mostly of grease and wet wipes.

Many products are labeled flushable, but there’s no regulation, standard, or testing for that labeling.  Independent tests show that products such as flushable wet wipes and disposable diapers shouldn’t be put into the toilet.  That applies to facial wipes, baby wipes, disposable diapers, and similar products.  In moving water toilet paper completely disintegrates within 10 seconds, but even flushable wipes are intact after 30 minutes or more.

Many sewage facilities have noted that the amount of materials they have to filter out has doubled in the last 5 years, largely due to people flushing wet wipes.  As reported by ABC News and others, the situation is bad enough that cities are suing makers of these products for problems costing millions of dollars, homeowners have filed class-action lawsuits as a result of toilet back ups, and the FTC is  performing an investigation.  Industry trade groups are now revising their guidelines on testing and labeling.

Here’s our list of 12 types of things you should never put down the toilet.  They don’t deteriorate in water quickly enough, and get trapped together in pipe bends and joints where they capture even more debris and accumulate grease.  Also, sewage treatment plants can’t remove many everything, and many prescription medications even in tiny amounts can harm aquatic life.

In brief, don’t flush anything that doesn’t completely disintegrate in water within a few hours nor anything that might harm the environment.  Simpler still: only poo, pee, and TP (toilet paper).